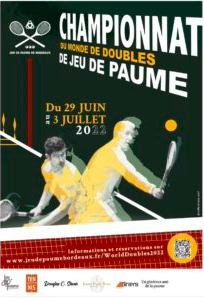 Riviere and Chisholm after losing the first two sets of the final day’s play won the required 5th set 6/4 to retain their world doubles title which they have held since defeating Fahey and Virgona in the 2015 championships held at The Tuxedo Club.  Riviere and Chisholm have now since winning in 2015 defended their title successfully 3 times.  It should also be remembered that Chisholm won the inaugural title with Julian Snow back in 2001 against Ruaraidh Gunn and none other than Steve Virgona who was Ruaraidh’s partner and along with John Lumley the opponents of Riviere and Chisholm for the 2022 event.  Fahey and Virgona won this title in 2003 and went on to defend the title a further 4 times before relinquishing it to the current champions in 2015.

The final set scores are:

The next world doubles will be held in America in 2024.  As yet we do not know the venue.

Streaming will be on this channel