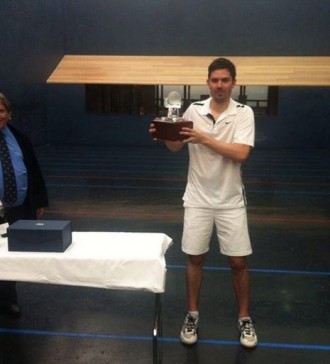 If this event was not on your radar, it is over!  The British Challenge final is played over the best of 13 sets and what a final it was.

A quick reminder on the overall format of this new tournament.  The best 8 players are eligible if they are British or another nationality but working full time at a UK based club.  The quarter finals were all competitive but there was a little bit of surprise in the way Ricardo Smith dispatched his opponent as Ricardo has not been playing much competitive tennis over the past two years.  So imagine the surprise in the semi finals when Ricardo also dispatched Bryn Sayers in 4 sets.  The other semi final between Chris Chapman and Ben Matthews, the number 2 seed was over in 3 sets 6/5 6/5 6/5.

For a tournament to lose its top seeds is unheard of, but mind you with the exits at Wimbledon this year, followers of sport may have to get used to this!

For tennis overall it is really good for the game, if this shift can be maintained and one can no longer say the “final will be between X and X” the game will only strengthen and the depth in tournaments increase.

The first day of the final saw Ricardo playing outstanding tennis and he won the 4 sets played.  The day off might give Chris time to evaluate his game plan and to come up with something different.  The second day’s play was different and Chris won the 5th and 8th set, but the overall score was in sets 6/2 to Ricardo.

Such a score line is a huge deficit but would it be possible for Chris to win all the 5 remaining sets?  A challenge has had this score line before.  The 2002 world championship at The Royal Tennis Court had the champion, Rob Fahey and his challenger Tim Chisholm at 6/2 on the final day.  Tim won the first 4 sets on the final day to see the most competitive 5th set being played.  As we know, Rob went on to win this final set and retain his title.

So, Chris had to come out with guns blazing, nothing to lose but the title!  Ricardo, though had a different idea and to win as quickly as possible!  Ricardo did and he only needed the 1 set to take his first major title. Full reports on the days’ play can be seen http://www.murtc.co.uk/news/

MURTC held a pro am day during the final week.  It was a fun day and as I understand it the amateurs were very competitive plus a few tough shots being played by the professionals to each other – nothing personal of course! The players all wore clothing from PlayBrave, the IRTPA’s new clothing partner.

The finals were marked by Andrew Lyons and on the final day the current world champion was present, probably extremely glad he was not having to play a challenge format match – he is leaving that to May 2014!