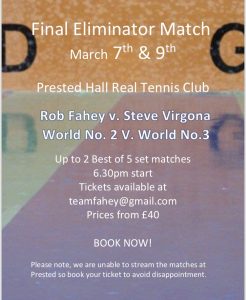 Prested are doing their best in endeavouring a coverage of the event.

1) Prested will be using the public scoreboard on www.chaseone.co.uk, so everyone can follow the score live online

3) Prested are going to attempt LIVE STREAMING via ‘Facebook Live’.  We can’t guarantee the quality of this, as are totally dependent on wifi signal/strength but please do keep this in mind as an option to watch the match.  A combination of this and one of the above might work well! Team Fahey will be streaming ‘Facebook Live’ from their page : www.facebook.com/TeamFaheyRealTennis/

Having both been successful in their first round matches (see results below), they are battling it out for the right to play the reigning World Champion – Camden Riviere in a best of 13 set match at Queen’s Club, late April.

Having won 12 World titles before, Rob is no stranger to World Championship matches, however this is only his second ever time playing in the Eliminator process, the first being in 1993(!).

We are selling 1 ticket that covers both Prested matches.  If the match is over after the first day (Wednesday 7th) there will be no play on Friday 9th March.  Don’t miss out on what is guaranteed to be some spectacular Real Tennis.

1 TICKET COVERS BOTH MATCHES AT PRESTED

Tickets are fully transferrable between people, but are non-cancellable and non-refundable

Prested Hall is offering 10% off market rate on the apartment rooms at the club, to book go to www.prested.co.uk