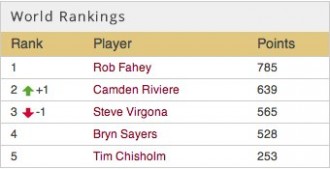 Why Is A Change Necessary?

The current ranking system runs on a 2 year basis, but there are not enough tournaments to reflect an accurate picture of the world rankings.

The rules for tournament seeding is currently based upon those with a world ranking of 100 points or more and then by handicap. The new method of calculation we believe is better and truly reflects a more accurate position and this has been agreed with the world’s national associations

The new World Ranking System will run over a three-year period rather than the current two-year period.  As from January 1st 2014 the current 100 point rule will be discarded, as there will be enough information in the system to show world ranking positions from 1 to 8 for seeding purposes in tournaments.

The race points will remain running over a 2 year period as they do now.

All of the national association’s IWCC members have accepted our proposal.