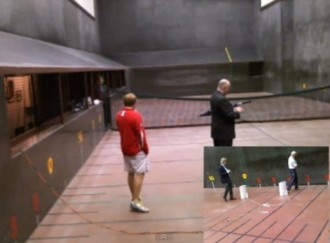 Inspite of a wet floor Camden Riviere won the title tonight 6/2 6/4 6/1 and regains the US Open title, which he first won in 2009 when he defeated the same opponent, Steve Virgona.

What about that wet floor?

The roof leaks! It must have been pretty wet outside and it was coming onto the court. At 4/3 to Camden in the second set and at 15/15 Steve called the marker, Robbie Whitehouse over, and after a few minutes of discussion it was agreed to suspend the match for 30 minutes while the dryers did their job on court.
Up to this time, the match had been pretty close, but all matches hang on a few pivotal points and for Virgona it turned out to be Murray’s feather moment. When play resumed Riviere took full advantage, his game rose a notch or two and Virgona had no answers. There was one earlier point when Virgona was leading 3/2 in the second set and the game score was 30/30. Virgona was at the service end and he might have thought a ball was not up from Riviere. He stopped moving for a second, the ball came back and fell for chase 1. Virgona lost that game and only won 2 more games in the match.
Riviere played very well indeed and it starts to make the race for the world championship eliminators very interesting. There are five more ranking tournaments this year to be played.